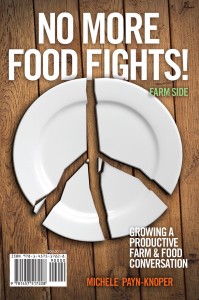 A farm girl since birth and a foodie since living in Italy, Michele Payn is one of North America’s leading farm and food advocates. She has helped thousands of people in agricultural, dietetic and food audiences. Michele wrote No More Food Fights! to encourage people around the food plate to connect in the interest of growing a more productive conversation. After all, food fights can be fun, but they usually end up stinking!

She invites you to explore the different sides of the plate and to think about food a little differently as you make decisions for your family. She has built farm and food connections in more than 25 countries and earned the Certified Speaking Professional designation awarded to less than 10% of professional speakers globally.

She also founded AgChat & FoodChat, virtual communities connecting thousands of agriculture and food people—many of whom are featured in No More Food Fights! Michele is an in-demand media resource whose work has been featured across agricultural media, on food panels and in major media channels such as USA Today and CNN to translate firsthand farm experience to the 98.5% of the population not on a farm.

Michele provides a framework for farmers, dietitians, chefs, food scientists, ranchers, consumers, agribusiness and foodies to reach across the plate and shake hands. She holds B.S. degrees in animal science and agricultural communications from Michigan State University, where her impact has been featured in a Spartan Saga. She’s owned cattle and baked bread since she was nine years-old—and believes her life’s calling is to connect those two worlds.

Widely recognized for the passion and fire she brings to agriculture and nutrition organizations across the United States and Canada, Michele knows her best audience is in her family’s kitchen and barn in west central Indiana. That’s where food—and conversation—is to be appreciated, enjoyed and even celebrated.  Michele now has a second book available, Food Truths from Farm to Table: 25 Surprising Ways to Shop & Eat Without Guilt.

Bring peace to the plate.

Food fights might seem entertaining, but there’s nothing funny about the fights taking place over food production. Resource limitations, animal welfare and biotechnology are just a few issues cropping up to create confusion in the grocery store. Ultimately, both farmers and food buyers are making a personal choice, and author Michele Payn calls for decorum instead of mayhem in the conversation around farm and food.

In an effort to break stereotypes, the book describes farmers who don’t wear overalls but who do use technology in producing food and preserving the environment, dairy farmers who work on “cow comfort” and how hard farmers work on sustainability. On the other side, the book reminds farmers that only a tiny percentage of the population lives on a farm and urges farmers to tell their stories through social media and every day conversation to correct mistaken beliefs about food production perpetuated by traditional media.

The book’s very design lends itself to exploring both sides of the issue. One side of No More Food Fights! offers six senses for those who primarily consume food—chefs, healthcare professionals, foodies, dietitians and retailers. Flipping the book reveals the other side, which features s 6½ steps geared toward those who produce food—farmers, agricultural businesses and ranchers.

Throughout the book, the author intersperses personal stories from farmers, food scientists, dietitians and ranchers. She naturally guides readers from both sides to “reach across the plate” to honestly explore food concerns and the critical connection from farm gate to food plate. Bring peace to your plate—and your next trip to the grocery store with No More Food Fights! as your guide.

You can purchase a signed first edition of "No More Food Fights" only at this site. Print and digital versions for the iPad, Nook and Kindle are also available at Amazon, Walmart, Barnes & Noble and other fine bookstores.

Click here if you're looking for the No More Food Fights! newsroom for media.

There’s no need to have food fights in the grocery aisles. No More Food Fights! provides a fresh look at some of the dilemmas food buyers and farmers both face. More importantly, this book gives ideas to get everyone around the food plate engaged in a conversation."

From acknowledging concerns and establishing shared values, to transparency and engagement, the topics addressed in Michele Payn’s No More Food Fights offer a roadmap for today’s ongoing national dialogue about food and farming. It all starts with listening and building trust and, at the end of the day, sharing personal stories rich in information so our customers can make informed decisions on their own and connect with farm and ranch families at the center of the plate."

There is a natural connection between food and farm that’s lost to most grocery shoppers. No More Food Fights! offers an inside look at some of the most critical issues that people around the food plate need to be talking about today."

- Janet Helm, MS, RD, author of The Food Lover’s Healthy Habits Cookbook and former media spokesperson for the Academy of Nutrition and Dietetics

Agriculture needs to address food buyer concerns in order to be successful in the future.  Food buyers need to know more facts about where their food comes from. Michele Payn bridges those worlds in No More Food Fights! and helps others do the same. A must-read."

No More Food Fights! takes a unique look at the very real problem of a disconnect between farm and food. Michele Payn offers an intriguing look at tough issues such as food safety, animal welfare and biotechnology. We are delighted she brought food, nutrition and agriculture experts together."

Contact Michele to learn more about her speaking, training, coaching, or consulting. Let her create something unique for your meeting.

Learn more about Michele's private, tailormade Table Talk Training to help you connect on an emotional level with others around the food plate. 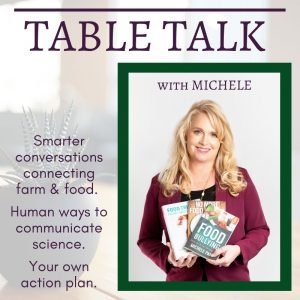